The following is extracted from a Gloucestershire Live article by Daisy Herman and Kim Horton, entitled ‘Big cat seen ‘waiting to pounce’ on side of motorway’ was published on 4 December 2021.

‘Out of place wildlife continues to be spotted in what should be the most unusual locations. 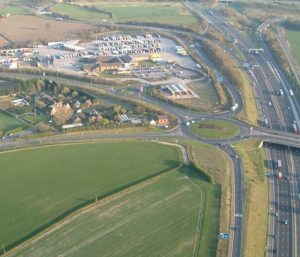 Earlier this year it was reported a wolf had been seen crossing a quiet M5 in the early hours of a wintry January morning.

However, on October 23, a man has claimed he saw a puma getting ready to pounce at 4pm on the M6 as he was coming to the Lymm junction.

Witness Phil said: ““I came off the junction at the M6 Lymm – I was heading North at the time.

“On my left-hand side, in a field, I saw a large black cat lay on its stomach, in the way cats do when they’re waiting to pounce on something.