The A47 Acle Straight is a nine mile stretch of road which was opened in 1831 over marshland, which appears to have a reputation of being haunted.  The following article by Stacia Briggs and Siofra Connor entitled Weird Norfolk: The ghost house of Acle Straight, was published in the Eastern Daily Express (7 April 2022) and an account of some of the experiences.

‘As Tina Clayton and her mother neared Great Yarmouth they saw something magical – a grand manor house, lit from within, the silhouettes of party-goers clear through the windows.

It was clear that a grand party was in full-swing at the house which was framed by tall Poplar trees and which glowed against the night sky. 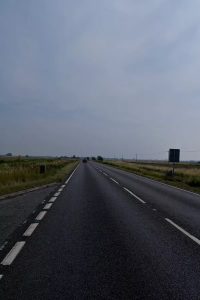 Tina looked forward to seeing the house in daylight the next time she passed: but when they approached the precise spot, there was nothing there.

No house, no party, no trees, not even a ruin. Just fields and a somewhat unnerving feeling that something very strange indeed had just happened: had Tina and her mother witnessed a time slip?

Weird Norfolk received a message from reader Tina Clayton, who asked for our help in regard to something inexplicable she had seen on the Acle Straight as a teenager.

It was 1979 and Tina was 12-years-old and a keen dancer who would often spend weekends travelling to London with her mum to dance.

She wrote: “One early evening, my mother and I were travelling in the car and we saw a very large house on the left-hand side as we were going towards Yarmouth, very near to the corner near Vauxhall Holiday Park, but not really close to it.

“We both saw the same thing: a very large house, grand, Regency/Georgian-style but not quite a mansion. Three trees in front, tall like poplars, and all the lights were burning.

“It looked like they were having a party as we could see people dancing in couples through the windows. We commented on it as we had not seen the house before, and then carried on with the journey.”

The enchanting scene the pair had caught a glimpse of stayed with them, and the next time they were on the same stretch of road, they looked out for the house.

“Nothing to indicated what we had seen before. There has been no sign of what we saw from that time on and I have looked every time I have driven on the Acle Straight.

“There is a ruined building near to the site but this is obviously an old farm building and is nothing like what we saw.”

Tina went on to explain that the house she and her mother saw was similar in size and design to the Georgian-built Assembly House in Norwich and that it was night-time when the pair had their unusual sighting.

“It looked very real – there seemed to be a really good party going on inside! We looked every time we passed for the house and to my family, it remains a mystery. I would love to know if anyone else has seen anything like this…”

Weird Norfolk has documented strange sightings on the Acle Straight in the past, including the story of the ghost spotted at the Halvergate turn-off, a notoriously dangerous stretch of the road which has tragically claimed many lives over the decades.

A driver reported watching in horror as a middle-aged man walked out into the centre of the road from the right-hand side and into the path of their car.

With no time to stop, the figure turned to look at the driver and as he did so, the car passed straight through him.

Other drivers have reported seeing a phantom horse and cart crossing the road directly in the path of oncoming vehicles with others recounting their sudden impulse to brake violently and for no apparent reason at certain points along the road.