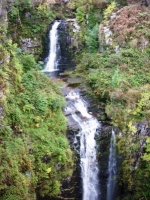 Glenashdale falls is one of the most impressive waterfalls in the West of Scotland, situated on the Isle of Arran, a short ferry ride from the mainland, the area is full of sites of archaeological interest. 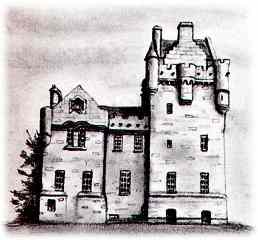 A seat of the Dukes of Hamilton in the 19th century, there has been a fortification on the site of the present castle for over a thousand years. It was an important Viking stronghold, and swapped English and Scottish hands during the Wars of Independence. Oliver Cromwell also left his mark here. 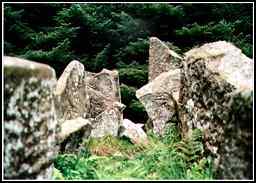 The Giant’s Graves are actually early Bronze Age horned galley graves with a central chamber. The covering mound has long since weathered away, leaving the inner chamber as a jumble of upright stones standing over a narrow stone lined depression in the ground. 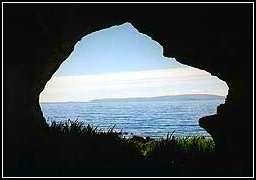 Along the Western shore of Arran, are a series of natural caves in the sandstone rock. One of the caves is said to have been the refuge in which Robert the Bruce had his famed encounter with a spider. 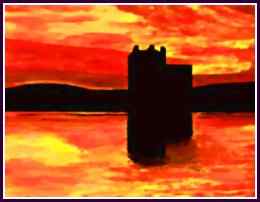 Lochranza is situated at the Northern Tip of Arran, the loch contains a small island with a ruined castle, which was mentioned by Sir Walter Scott 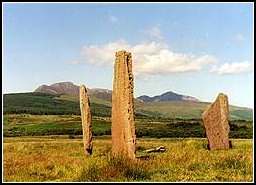 The Isle of Arran, off the West Coast of Scotland, has many stone circles and standing stones dating from the Neolithic period and the early Bronze Age. The finest collection of circles can be found on Machrie Moor, on the West of the island. The whole moorland is littered with the remains of early man, from hut circles to chambered cairns and solitary standing stones.

Kilmichael is possibly the oldest house on the Isle of Arran and is associated with the Fullerton family who were one of the two major landowners on the island. The name itself indicates the location of the house may be on the site of an early Christian cell dedicated to St Michael. An apparition of a Grey Lady supposedly haunts the hotel.