Earthman And The Midwife

In The Science of Fairy Tales (1891), Edwin Sidney Hartland gives the following account of a Swabian* story where a human midwife is called to aid an Earthman’s wife (a name given to this type of fairy) give birth.

The Girl Who Was Killed by Jews

It is a sad fact that many legends across Europe are Anti-Semitic. The following legend is from Jacob and Wilhelm Grimm’s Deutsche Sagen (1816/1818). 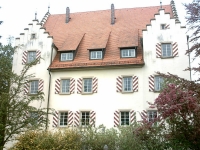