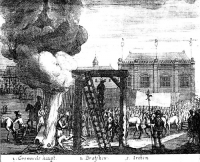 Laid out in 1698, Red Lion Square is on the boundary between Holborn and Bloomsbury and was named after the Red Lion Inn that used to be on the site. Red Lion Square is reputedly haunted by the regicides Oliver Cromwell, John Bradshaw and Henry Ireton.

There is a strange tale of a phantom bird like creature that in 1913 attacked and killed a young barrister named Charles Appleby in offices connected to Lincoln’s Inn, the oldest of the four Inns of Court in London. An account of this haunting appears in True Ghosts & Spooky Incidents by Vikas Khatri.