On 6 January 2010 the Shields Gazzette published the following article entitled ‘Crowds flock to see church spectre’. It concerns the reporting of an apparition in the 19th century outside an unnamed Whitechapel church. 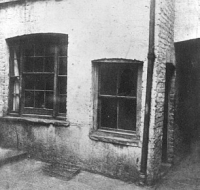 Mary Kelly was brutally murdered on 9 November 1888 and although it has been debated about, she is generally believed to be the final victim of Jack the Ripper who killed five prostitutes around Whitechapel in the later months of that year.

Mary Pearcey was executed on 23 December 1890 for the murder of Phoebe Hogg and her infant daughter also named Phoebe. Some elements of this murder were similar to the 1888 Whitechapel murders and Mary has been considered as a potential candidate for being Jack the Ripper. It is also claimed that her apparition has been seen, wandering the streets around Whitechapel.

In the early hours of 31st August 1888, the body of Mary Ann "Polly" Nichols nee Walker was discovered in a stable entrance on Buck’s Row (now Durward Street). Nichols was the first Whitechapel murder victim of the unidentified serial killer known as Jack the Ripper.