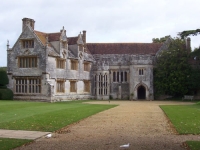 There are still parts of this manor dating back 500 years, it was occupied early in its history by the Martyn family from 1350 to around 1600. The Martyn family were devoutly catholic and may have hidden priests within the house during the time England was under protestant rule. Priest holes, which are small secret recesses within walls, have been found which attest to this.