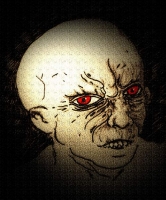 The Phantom Of Croglin Grange

The phantom of Croglin Grange is one of the best known vampire stories in Britain. It is as famous in the annals of vampire lore as Whitby and its Dracula associations. The actual story bears the marks of fiction and first appeared in a book called ‘In My Solitary life’ by Augustus Hare. What follows is an adapted and shortened version of his story.