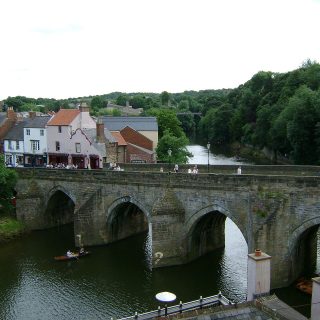 Elvet Bridge is a Grade I listed mediaeval bridge acrossing the River Wear in Durham. In ‘Notes on the Folk-lore of the Northern Counties of England and the Borders’, William Henderson (1879) refers to a piece of folklore associated with the bridge. ‘It was on one of the unlucky days (between St.

According to Notes on the Folk-lore of the Northern Counties of England and the Borders by William Henderson (1879), ‘On St. Thomas’s eve and day, too, have carriers and waggoners been most alarmed by the ghost of the murdered woman, who was wont to haunt the path or lane between the Cradle Well and Neville’s Cross.

In his ‘Memorials, or the memorable things that fell out within this island of Britain from 1638 – 1684’ (Published 1818), Robert Law quotes the diary of Jacob Bee of Durham, who refers to a strange experience that was deemed a portent of death. “John Borrow departed this life the 17th day of January being Satterday this yeare 1684 and twas reported y’he see a coa

The following tunnel legend was printed in ‘Notes on the Folk-lore of the Northern Counties of England and the Borders’ by William Henderson (1879). ‘There was a wild legend in my native city of a subterranean passage between Finchale Abbey and the cathedral of Durham, and of an attempt to penetrate it.