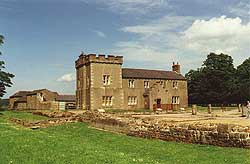 This impressive site is the remains of a Roman fort on Hadrian’s Wall. The area was occupied from much earlier times and recently a Neolithic burial has been found. There is also evidence of a large Dark Age Hall on the site. Traditionally the site has been identified with Camlan, the site of King Arthur’s last battle.