At least three ghosts are said to haunt the Old Bulls Head Inn. Whether any of them is responsible for the poltergeist type activity here no one knows. Objects disappear and reappear again in strange places. On one occasion a book from the bookcase was left open on the table even though nobody had touched it.

The Woodman has been subject to continued poltergeist activity over the years. In the upstairs kitchen all the plates were smashed except one which was left in the middle of the floor. A large key went missing only to reappear the following day in the middle of a bed which had only just been made. 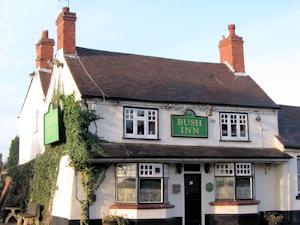 The Bush Inn dates back to Georgian times and has a long history of strange phenomena. The sounds of barrels being moved and loud bangs have been experienced here together with the sight of an ornamental plate being flung from the wall only to land intact some feet away. The sounds of heavy footsteps coming from the attic have also been heard on occasions.