The following article by Sue Crawford entitled ‘Ghost hunt at Gretna’s famous Blacksmiths Shop’ was published in the News & Star on 8 August 2013. 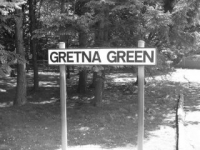