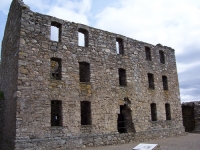 The castle that once stood on the site of the barracks, was said to be haunted by its notorious lord, who was trapped in limbo playing cards with the Devil.

Ruthven was first used as a Barracks in 1689. It was taken by force twice; once when the garrison surrendered to Bonnie Dundee, the other time being in 1746 when it was overrun by Jacobite troops.