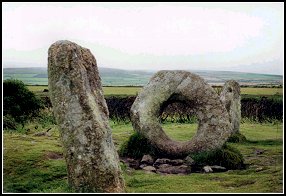 Men-an-Tol, consist of a holed stone (with the largest hole of any British holed stone) between two upright stones, with other fallen stones nearby. The holed stone is considered to be the remains of an entrance to a chambered tomb. The whole structure having been covered with a mound of earth. As with many of these cromlechs it is difficult to image a mound covering them at any time.