‘About a league below Quimperle is the ferry of Carnoet. Some portions of the old chateau of Carnoet still remain, and tradition says that this building was one of the many residences of the infamous Count Commore (Conomor) (the Bluebeard of Brittany), who is said to have murdered his numerous wives.

On the banks of the river an old oak stands at some distance from the ferry, its almost branchless trunk leans far over the stream and looks as if it must fall into the water. It is a very ancient tree, and a weird legend is attached to it. 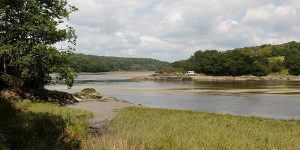 ago there lived in the village of Clohars a young couple called Guern and Maharit; they were betrothed, and were to be married two days after the “Pardon of the birds,” which, as everyone knows, happens every year in the month of June at the entrance of the forest of Carnoet.

One evening after sunset the lovers came home from a visit to some relations in the parish of Guidel; when they reached the ferry of Carnoet, Guern shouted for the ferryman.

“Wait for me, Maharit,” he said, “while I go and light my pipe at my godfather’s cottage; it is close by.”

The boatman of the ferry was a mysterious being who lived alone in a hut beside the river. Strange stories were told of him. It grew darker and darker, and Maharit felt timid at the thought of being left alone. “Do not be long away, Guern,” she said.

“I will be back, my beloved, before you are in the boat,” and he ran away. The ferryman soon appeared: he was tall and wild-looking, and long grey hair floated over his shoulders.

“Who wants me?” he growled. “It is too late. Are you alone maiden?”

” Loïk Guern is coming; he has only gone to light his pipe.”

“He must be quick then; get into the boat,” said the ferryman impatiently.

The girl obeyed mechanically, but she was surprised and frightened to see the ferryman jump and push the boat off from the bank without a moment’s delay.

“What are you doing, my friend?” she cried. “We must wait for Loïk Guern, I tell you.”

There was no answer, and now the boat reached the current, but instead of passing across to the oppo- site shore they shot rapidly down the river.

“Stop, stop, my friend, for pity’s sake!” cried Maharit in an agonised voice. “We must go back; what will Loïk Guern say to such folly?” She clasped her hands imploringly; but the ferryman neither spoke nor looked at her, and the boat still impelled forward, descended the river more and more rapidly.

Maharit bent towards the shore. ” Loïk, Loïk,” she cried. The words died away on her lips, for she saw shadowy forms standing on the gloomy banks; they stretched their arms towards her with menacing gestures, and she drew back shuddering. She knew these were the spirits of the murdered wives of Commore. Maharit uttered a loud cry and fell lifeless in the bottom of the boat.

Loïk Guern lit his pipe, said a few words to his godfather, and hastened back to the ferry. But Maharit was gone, and the boat was gone too! He gazed anxiously across the river, and up and down its banks, now cold and sombre in the gathering darkness.

There was no sound or sign of living thing.

From far away a cry came to him on the night breeze.

At that moment the boat disappeared round a turn in the river.

Suddenly, from amidst the tall weeds and rushes near the ferry, rose up the gaunt figure of an old beggar woman.

“You waste your breath, young man,” she said. “The boat and those in it are already far from here,” and she pointed down the river.

“What do you mean, mother? What has happened to Maharit?”

“The young girl is gone to the shores of the departed; she forgot to make the sign of the cross when she got into the boat, and she also looked behind her.”

“You are mad,” cried the peasant impatiently.

“Go to the devil with your old wives’ tales.”

He did not wait for an answer; he set off running like a madman along the riverbanks in the direction the old woman had pointed out, waking the silence of the night with cries for his beloved Maharit.

At daybreak Guern returned worn out and weary to his village. He went to the parents of the young girl to her friends. He asked tidings of Maharit of everyone he met, but he could gain no news of her, she had not been seen.

He passed the next three days in wild despair, searching for his beloved in the neighbouring villages and through the forest. Towards evening, on the third day, he sat down on a rock beside the river, overcome with grief and fatigue. Suddenly the old beggar woman stood before him. He had not heard her approach; she seemed to spring out of the earth.

“Alas, no, mother! May the good God have pity on me, I am heart-broken,” he said with tears in his eyes. “Have you news of the sweet child? Tell me, for Christ’s dear sake! Speak quickly, mother. We only waited for the pardon of Toul-Foen to become man and wife.”

“I have told you all I know, my poor Guern. The child forgot to make the sign of the cross when she got into the boat, and she spoke and looked behind her, and this gave the cruel ferryman power over her, and he has taken her to the shores of the ‘ departed.’ ”

“Where is this accursed shore of the dead?”

“Ah, my poor Guern, blaspheme not,” interrupted the old woman. “It is a secret from Christians; it is the secret of the sorcerer Milliguet he personates the ferryman; he conducts the boat from this haunted spot, and loses many souls. Yes, he is powerful; but those whom Jesus loves are able to overcome him and the charitable are always blessed by God. I am only a poor old woman, Loïk Guern. I am hungry I am very hungry.”

“My poor mother,” said the young peasant, “here is some bread take it. I care for nothing since I lost Maharit,” and he burst into tears as he gave her his black loaf.

“Thank you, Guern. Ah, what a good heart you have! You are a good Christian, and if you do as I bid and if it is the will of God you may release Maharit.”

“The Holy Virgin reward you,” said the poor fellow; and he looked up with hope in his eyes. “What shall I do, mother?”

“You must first cut a branch of holly, and you must cut it at midnight, in the village of the Korrigans. You know where it is, in the forest underneath the spot called ‘the Stag’s Leap.’ Dip this holly branch in the holy water-stoup at the chapel of St. Leger, then at dusk go with it to the ferry.”

“Be patient, my son.” She raised her shrivelled hand warningly. “You must then call the ferryman.

This fellow has sold himself to the evil one,” she went on, ” and when you have got into the boat, be sure you do not look about or behind you, for every night the banks of the river are haunted by the dead wives of Commore, and their cries and gestures will trouble your reason. You will neither see nor hear them unless you look about or behind you. You must tell your beads diligently, and above all you must make the sign of the cross reverently; and when you have come to the thirty-third bead of your rosary the thirty-third you understand

“You must raise the blessed holly branch and show it to the ferryman, and then in the name of Christ command him to take you living to the shores of the dead. Miliguet will tremble at the sight of the holly branch, and his power will leave him, and he will obey you. Do you remember all I have told you, Loïk Guern?”

“I see no farther,” she said. “I can tell you nothing more, my son. Do exactly as I bid you, and wait in hope for the end.”

She disappeared as suddenly as she had come, leaving Guern full of eager hope.

At midnight, he found his way to the village of the Kerrigans. Close by the Stag’s Leap he cut a branch of holly, and then he went off to the chapel of St. Leger, dipped the holly in the blessed fountain, and earnestly entreated the aid of the saint.

The next evening at sunset he went alone to the ferry of Carnoet, keeping the holly branch carefully hidden under his long jacket.

The ferryman came, and Guern got into the boat without a word. There was deep silence, only broken by the plash of the ferryman’s oars in the water. At first Guern began to tell his beads silently, but with fervour; but by the time the boat had reached the middle of the river he was so overcome by the remembrance of his lost Maharit that he forgot his prayers and the old woman’s caution; he looked behind him, the string of beads slipped from his trembling hands and fell into the water.

Instantly loud cries resounded along the banks, and the boat, drawn into the current, turned and dashed down the river with frightful rapidity.

Guern roused himself, and remembered the holly branch; he drew it forth and waved it before the silent ferryman.

“Conduct me to the shores of the departed,” he cried; ” take me to my betrothed.” But in his agitation he forgot to say the word living?

The boatman took no heed; the boat drove on. Then, with an impulse over which he had no control, Guern in wild despair struck the ferryman with the consecrated branch.

The strange man uttered a terrible cry threw down his oars and plunged into the dark water. Still the boat drove madly on on on! Guern could never tell how long till it struck with awful violence against a rock and was dashed to pieces beneath a gnarled oak that bent over the river.

For years afterwards, at all the pardons of Clohars, of St. Leger and their neighbourhood, was to be seen a pale distracted-looking man who ran hither and thither among the crowd. He cried out piteously, while tears ran down his furrowed cheeks, “Ah, my friends; ah, for the love of God and the saints, take me to the shores of the dead!”

The young people used to look at him with surprise and pity, but the older folk only shook their heads and said “It is the poor madman of the ferry; it is Loïk Guern.”

Note: The map shows part of the river between Clohars-Carnoët and Guidel, I am unsure exactly where the ferry in the tale was said to cross the river.