The following article by Stacia Briggs and Siofra Connor entitled ‘Have you seen a whistling ghost off the Acle Straight?’, was published in the Eastern Daily Express (26 May 2022) and describes a strange experience from the early 1960’s at Breydon Water, which is the United Kingdoms largest protected wetland.

Weird Norfolk received a letter from reader JB Howkins, who described an unsettling meeting in the early 1960s, when he and two friends were close to the Acle Straight.

“With reference to your item ‘Acle Road Ghosts’,” wrote Mr Howkins, who lives in Broadland, “in the winter of 1962 or 1963, I and two friends were shooting on the north side of the Acle Straight. 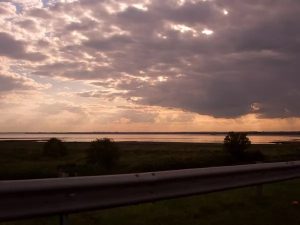 “As it was getting dark and not having shot, we crossed over to the Breydon side of the road. Breydon was frozen over, except for a small rivulet in the centre.”

It is likely that Mr Howkins’ recollection is of The Big Freeze in the winter of 1962/3.

Just before Christmas 1962 and from Boxing Day until March, much of the county lay under a frozen blanket of snow with temperatures in Norfolk dipping to -19C in January 1963.

Rivers and Broads froze over, ships were trapped in the ice and many birds and animals died in the Arctic conditions, possibly contributing to Mr Howkins’ poor luck while out shooting.

Colder than the harsh conditions of 1947, it was the coldest winter on record since 1740, with six metre snow drifts, impassable roads and train tracks and frozen telephone lines.

Archant’s photographic archives are filled with atmospheric pictures of Breydon Water’s Arctic past, boats stranded in ice, skating on a wide expanse of frozen water, birds skittering along searching for food.

The Breydon area was once a popular spot for wildfowling, shooting wild geese and ducks, before it became a nature reserve in 1968.

Mr Howkins continued: “As we saw no game and the weather was beginning to change for the worst, Billy Edwards and Arthur Bear and myself decided it was enough when the snow began to fall.”

The trio began to make their way towards home when they heard a noise pierce the chill air: a whistle, coming towards them.

“I said: ‘Did you hear that?’ ‘that whistle? Yes,’ they said, ‘look: someone is coming over the ice’,” wrote Mr Hawkins.

“And then a man appeared, whistling, dressed in ordinary street clothes and trilby, no foul weather item at all. He walked about 10 feet away from us, still whistling over the ice toward the centre of Breydon, and certain death.

“We three were in shock and when back on the road and home, Billy called into the police station to report what had happened. The next day, I got the EDP to see if anything was reported. But no, nothing, and there never was!”

“Years later I told this tory to a sideman [assistant churchwarden] at my local church. ‘What do you think?’ I said. ‘Oh, that’s easy,’ he replied, ‘you saw a ghost!’

Sadly, this stretch of water has claimed many lives over the years, some by accident, some by choice, so it is difficult to tell if the whistling man can be identified from those who have died there.