"You have been often at the Gatehouse," said Johnny Nicholson; "well, you’ll mind a flat piece of land near Enrick farm; well, that was once a large loch; a long way down from there is still the ruin of a mill, which at that time was fed from this loch.

Changelings In The Borders

Edwin Sidney Hartland gives the following account of Dumfries and Galloway Changelings in his ‘The Science of Fairy Tales’ (1891). ‘A Kirkcudbrightshire tale represents a child as once left in charge of a tailor, who "commenced a discourse" with him. "’Will, hae ye your pipes?’ says the tailor. ‘They’re below my head,’ says the tenant of the cradle. 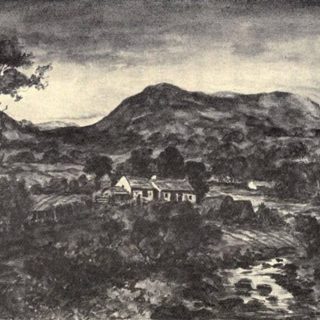 Not much now remains of the scene where this famous case took place, with just a single skeletal tree marking the location of the Ring Plantation at Ringcroft of Stocking where in 1695 the home of Andrew Mackie in the parish of Rerrick was reputedly haunted by a poltergeist and this caused a stir in Scotland after the case was published in a pamphlet by the local minister.

In the village of Borgue there lived a young boy who the locals suspected had a relationship with the faeries.

The worm here was white in colour and this legend may have inspired Bram Stoker’s novel ‘Lair of the White Worm’. It wound itself around Mote Hill and got up to the usual tricks.   A local blacksmith made a suit of armour covered with retractable spikes.

According to legend a sea dwelling worm devoured fish stocks that the local people depended on. Not satisfied with seafood, it crawled ashore to eat farm animals and humans. People from the villages along the shore built a huge palisade of sharpened stakes and erected it at low tide. When the worm came in with the high tide it impaled itself on the spikes.