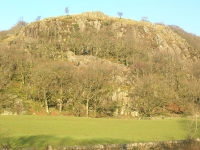 The legendary stronghold of Vortigern, and the place where the young prophet Merlin revealed the fighting dragons.  In legend there are two characters associated with the same story with slight variations. One is Vortigern, the Dark Age ruler who let the Saxons into the country, and was responsible in part for their later invasions.

This holy mountain has a rock seat called ‘The Seat of Prince Idris’. It is said that anyone who spends the night alone on the mountain will either die, become insane or become a poet.

The seat of Prince Idris is also known as the Chair of Idris, and was named after a giant who was said to view the heavens from this lofty point.