The Llanbradach Colliery and ‘The Evil Omen’ 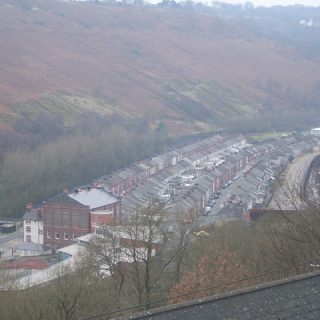 Before Picton Street in Merthyr Tydfil was replaced by Caedraw Road, you could find the Black Lion Inn (58 Picton Street), and according to the following story which appeared in British Goblins (1881) by Wirt Sykes, two of its drunken customers attempted to summon the Devil which appeared to them in the shape of a gosling. ‘These men were one night drinking together at the Black Lion Inn, when

Ffynnon Fair is a holy well situated outside the village of Llwyn-y-pia. The well is the oldest recorded Christian site in the Rhondda. Some historians date the site back further, and it could be pagan in origin. The water from the well is reputed to cure ailments, especially rheumatism and poor eyesight. Rhisiart ap Rhys wrote:

The following tale of Llyn y Forwyn (Damsel’s Pool) appeared in ‘Celtic Folklore Welsh And Manx’ (1901) by John Rhys and was in turn a translation of a Welsh language version featured in Elfed and Cadrawd’s ‘Cyfaill yr Aelwyd a’r Frythones’ (1892).