The following account of a poltergeist in Barmouth appeared in an edition of Folk-lore (June 1892) and was also reproduced in Richard Holland’s ‘Haunted Wales: A Guide to Welsh Ghostlore’ 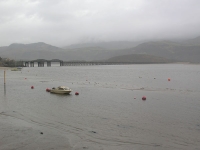