In the early 1990’s a twelve foot carcass covered in sand and seaweed was discovered on a Benbecula beach by 16 year old Louise Whitts. 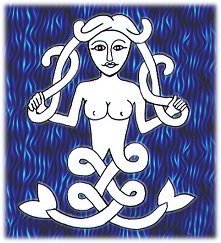 A mermaid is said to be buried in the sands in the area around Nunton. In 1830 some women who were gathering seaweed spotted a mermaid in the waters close to the shore.They tried in vain to catch her, but she was too clever for them.