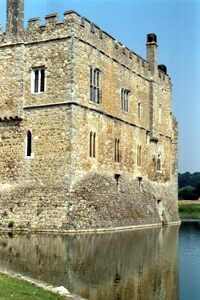 Leeds Castle is named after Led who is supposed to have been the Chief Minister of King Ethelbert IV of Kent. Originally a Saxon manor house called Esledes, built in AD857, it consisted of a wooden palisade and earthwork enclosure. It was granted to the Godwin family by King Edward the Confessor but did not become a stone castle until Robert Crevecoeur started upgrading it in 1119.