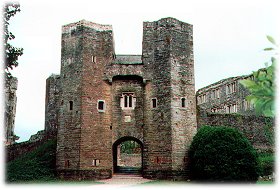 The castle, now a romantic ruin, is reputed to be one of the most haunted in the British Isles. It has numerous legends associated with it, and although now only a shell of its former glory, it retains an air of its troubled history.

The mysterious footprints, which appeared overnight in heavy snowfall in Southern Devon in 1855, have never been adequately explained. According to contemporary reports, they stretched for over a hundred miles, and went through solid walls and haystacks, appearing on the other side as though there was no barrier.