According to The Legendary Lore of the Holy Wells of England by Robert Charles Hope (1893),’ A small town on the left-hand side of the road leading from Cockermouth to Egremont, and near the...

The News & Star published the following article by Matthew Legg entitled ‘Cumbrian pub woman claims hand dryer is haunted’ on 7 April 2011. The article concerns a pub in Workington called Elliotts where the staff have had some strange experiences.

Is there a large Black Cat prowling West Cumbria? On Friday 8 January 2010 the following article by John Walsh entitled ‘Footprints fuel rumours of the beast of Workington’s Borough Park’ appeared in the News & Star. 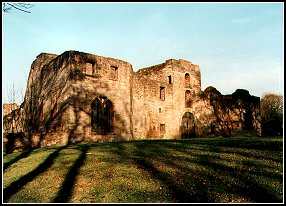 The ruined hall was once a magnificent fortified home belonging to the powerful Curwen family. It is said to be haunted by ghostly children and the Jacobite ‘Galloping Harry Curwen’ (Henry Curwen circa 1715).