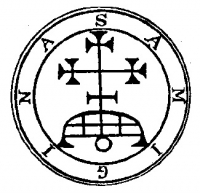 The Fourth Spirit is Samigina, a Great Marquis. He appeareth in the form of a little Horse or Ass, and then into Human shape doth he change himself at the request of the Master. He speaketh with a hoarse voice. He ruleth over 30 Legions of Inferiors. He teaches all Liberal Sciences, and giveth account of Dead Souls that died in sin. 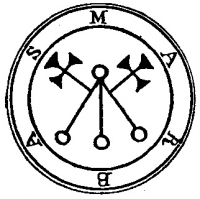 The fifth Spirit is Marbas. He is a Great President, and appeareth at first in the form of a Great Lion, but afterwards, at the request of the Master, he putteth on Human Shape. He answereth truly of things Hidden or Secret. He causeth Diseases and cureth them. Again, he giveth great Wisdom and Knowledge in Mechanical Arts; and can change men into other shapes. He governeth 36 Legions of Spirits. 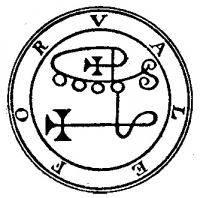 The Sixth Spirit is Valefor. He is a mighty Duke, and appeareth in the shape of a Lion with an Ass’s Head, bellowing. He is a good Familiar, but tempteth them he is a familiar of to steal. He governeth 10 Legions of Spirits. His Seal is this, which is to be worn, whether thou wilt have him for a Familiar, or not. 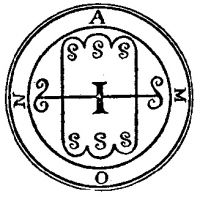 The Seventh Spirit is Amon. He is a Marquis great in power, and most stern. He appeareth like a Wolf with a Serpent’s tail, vomiting out of his mouth flames of fire; but at the command of the Magician he putteth on the shape of a Man with Dog’s teeth beset in a head like a Raven; or else like a Man with a Raven’s head (simply). He telleth all things Past and to Come. 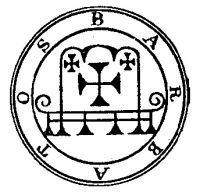 The Eighth Spirit is Barbatos. He is a Great Duke, and appeareth when the Sun is in Sagittary, with four noble Kings and their companies of great troops. He giveth understanding of the singing of Birds, and of the Voices of other creatures, such as the barking of Dogs. He breaketh the Hidden Treasures open that have been laid by the Enchantments of Magicians. 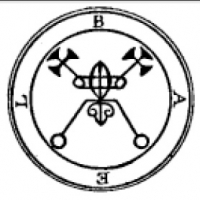 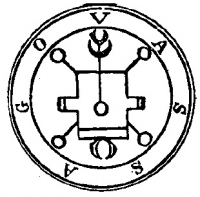 The Third Spirit is a Mighty Prince, being of the same nature as Agares. He is called Vassago. This Spirit is of a Good Nature, and his office is to declare things Past and to Come, and to discover all things Hid or Lost. And he governeth 26 Legions of Spirits, and this is his Seal. 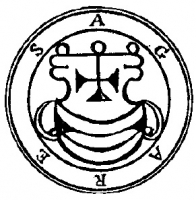 ‘The Second Spirit is a Duke called Agreas, or Agares. He is under the Power of the East, and cometh up in the form of an old fair Man, riding upon a Crocodile, carrying a Goshawk upon his fist, and yet mild in appearance. He maketh them to run that stand still, and bringeth back runaways. He teaches all Languages or Tongues presently.

Lemegeton or Lesser Key of Solomon

This work dating from the seventeenth century is in four parts and is supposed to be a list of the names, orders and offices of all the spirits King Solomon had contact with.