Measuring roughly 12 acres in size St Michael’s or Fort Island is connected to the mainland at the Langness Peninsula by a causeway. There are two ruined structures present, the 12th century St Michael’s Chapel and Derby Fort which dates back to 1645 and the English Civil War. 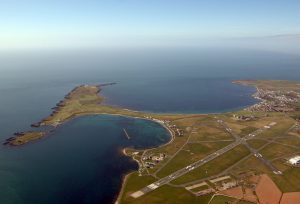 “At the ruined chapel in St. Michael Island, Derbyhaven, many vessels have been wrecked. A man says, who lives at Castletown, he had seen a sailor, in ribbon and shoes, coming up from the shore about sunset, and seen him, times, go up the land.”

“A ship was struck at St. Michael Island, and a company of men engaged to hack it up, and the night, about 12 o’clock, they saw a white thing, like a human being standing at the chapel door, and he was groaning, so the men refused to carry any more timber up. The ship was ‘James Crossfield,’ of Liverpool, and 40 hands drowned.”

The following description of the James Crossfield tragedy is extracted from ‘Browns Isle of Man Directory, 1882] ‘In the beginning of January, 1867, a terrible storm raged along the Manx coasts, doing great damage both on land and sea. A Scotch vessel was wrecked on Contrary Head, near Peel, the crew being saved with great difficulty and danger from the tops of the neighbouring cliffs. Another vessel, a Welsh schooner, was wrecked near Ramsey, the crew also escaping to land. But the most disastrous of these wrecks was that of the East Indiaman, the James Crossfield, which struck on the promontory of Langness, near Castletown, early in the morning of Sunday the 6th. In a few minutes after striking on the terrible rocks which form this part of the coast, the ship went to pieces, and all on board, 37 in number, perished. The value of this unfortunate vessel, which was considered one of the finest of the East Indian clippers belonging to the port of Liverpool, was, with its cargo, estimated at above £100,000.

Another source describes the James Crossfield as a 979 ton iron clipper and the loss of life to include two passengers and the Captain’s son.