28 December – Holy Innocent’s Day is said to be the unluckiest day of the year.

8th May – The Helston Flurry Dance takes place, where Helstonians take part in a pagan ritual processional dance through the town in a custom that pre-dates Christianity and probably dates back to Celtic times. The dance takes place each eighth of May unless it falls on a Sunday or Monday and was probably originally a fertility or Spring festival. 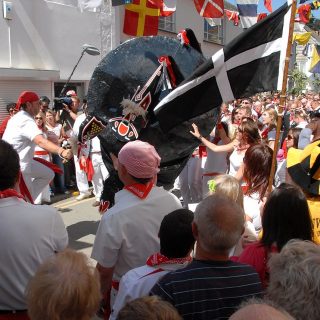 1st May – The festival starts at midnight in the early hours of Mayday. The actual Hobby Horse is a hoop covered with black material with an African mask, and a horses head with snapping jaws. A man stands inside the hoop and the procession parades around the town. The festival has ancient origins.

On 19th January 1643 Sir Ralph Hopton’s Royalist forces camped at Boconnoc were surprised to discover a Parliamentarian army under the command of Lord Ruthin deployed on Braddock Down. Ruthin ordered an attack rather than waiting for the reinforcements under the Earl of Stamford to arrive from Liskeard. Hopton’s forces won the battle securing Cornwall for the Royalists.

The legend of the torments of Jan Tregeagle stretch from the bleak moors of Bodmin, to the lonely beaches of Land’s End. He has been identified by some as a forgotten Celtic god who still haunts the landscape.

In the time of giants in the Penwith area of Cornwall, there lived a particularly troublesome giant called Bolster, who was of such enormous stature that he could stand with one foot on Carn Brae, and the other on the beacon near St Agnes, a distance of 6 miles.

Cormoran was the name given to the giant who is said to have built and lived on St Michael’s Mount, he was killed by Jack the giant slayer.

The Giant of Carn Galva

This tale tells of a gentle giant who lived in Cornwall, the land of giants, and a place where they were thought responsible for many of the natural landscape features. The story appears in Traditional and Hearthside Stories of West Cornwall by W. Botrell 1870.

Although this tale is very old, dating from 1665, the year of the great plague, and the year before the Great Fire of London, it is interesting because the person who performed the alleged exorcism recorded the events, and there were a number of witnesses. Although the exorcism was said to be a success her spirit is still said to wander in the local environs.