‘In the family of Kirkpatrick of Closeburn the tradition was, that when a death was about to take place in the family a swan invariably made its appearance on the loch that surrounded the castle. “The last omen of this nature on record saddened the nuptials of Sir Thomas, the first baronet, when marrying for the third time. On the wedding-day his son, Roger, went out of the castle, and, happening to turn his eyes towards the loch, descried the fatal bird. Returning, overwhelmed with melancholy, his father rallied him on his desponding appearance, alleging a stepmother to be the cause of his sadness, when the young man only answered ‘Perhaps ere long you may also be sorrowful,’ expiring suddenly that very night.” 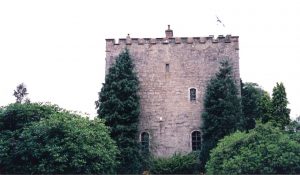 The above account of the families omen of death tradition was extracted from ‘Witchcraft and Superstitious Record in the South-Western District of Scotland by J Maxwell Wood (1911). Sir Thomas did indeed marry three times and the third marriage took place in 1686 when he married Grizel, daughter of Gavin Hamilton. Roger was the son of his second wife, Sarah Ferguson, whom he had married on 7 December 1672. Therefore, Roger would still have been fairly young at the time of the third marriage. Roger however is thought to have survived to long enough to inherit Alisland from his father who died around 1695. He eventually died himself a bachelor at a later date. I have found a reference to other versions of the story sometimes using different names for the victim.

Closeburn Castle, the seat of the Kirkpatrick family is a 52ft tower house dating from the 14th century. The loch which encircled it and presumably upon which the swan appeared has now been drained.