There are many folk customs that are said to foretell a death.  The following descriptions of a prophetic light in the communities around Glencairn are extracted from [Witchcraft and Superstitious Record in the South-Western District of Scotland by J Maxwell Wood, 1911]

‘A special form of warning is the “Licht before Death.” In the parish of Tynron it is recounted how this mysterious light illumined up, on one occasion, the whole interior of a byre where a woman was engaged milking cows, and how afterwards she learned that her mother had died the same evening. 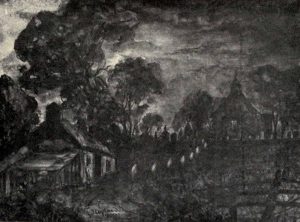 Mr John Corrie (Moniaive) gives a good example of this form from the parish of Glencairn:—

“An old Glencairn lady, on looking out of the door one dark night, saw a strange light shining in the vicinity of a house where an acquaintance lived. Entering the house she commented on what she had seen, and expressed the hope that ‘it wasna the deid licht.’ Her fears were ridiculed, but next morning it transpired that a member of the family over whose dwelling the light was seen had committed suicide.”

There is another illustration from Glencairn, and perhaps a more valuable one, on account of the precision of its details:—

“Peggy D——, when going to lock her door one night, saw a light go past, carried, as she supposed, by a neighbour. There was nothing unusual in this, but there was a high stone dyke with a flight of steps in it close to the foot of the garden, and she was surprised to see the light and supposed light-bearer pass right through the obstructing fence as if nothing of the kind had been there, and although the ground below the house was very uneven, the light itself was never lost sight of for a moment. Peggy, rooted to the spot, watched the light go down through the fields, then along the public road until the churchyard was reached. When turning in that direction it passed through the locked gate with the same apparent ease that the other obstacles had been surmounted, and, entering the graveyard, became lost to sight among the tombstones. A week later Peggy D——’s daughter was carried a corpse to the same churchyard.”