Back in the 19th century the Parish Church gained a local reputation of being haunted. A piece entitled ‘The Laying of a Ghost’, appearing in the Peel City Guardian, dated 28 December 1901 describes the experience that was often interpreted as a ghost and the explanation behind it. 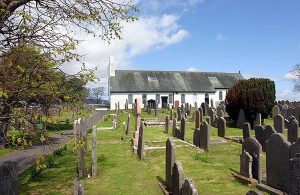 “Ghosts are common here,” writes an Isle of Man correspondent, “but perhaps the most persistent, and, till now, inexplicable, has been that of Malew Parish Church. The ghost itself was, needless to say, never seen, but people passing at night along the main road were frequently startled by seeing a light move along inside the church from the door to the chancel. It was popularly supposed that this was a light carried by a spectre, for it was known that no living person was inside the building. The mystery has at last been solved by the Vicar. He carefully watched the light and found out that it emanated from a distant lighthouse fitted with a revolving light. Its rays touched the church windows one by one as the light revolved, producing a very realistic impression of a person walking up the aisle inside carrying a light.”-” St. James’s’ Gazette.” [Peel City Guardian, 28 December 1901]