In the Dundrennan district of Kirkcudbright a persisted belief lingers concerning a headless lady haunting the Buckland Glen. The following narrative which has been handed down lends an increased interest to the tradition:—

Long ago a Monkland farmer, accompanied by one of his farm-lads, was on his return from Kirkcudbright at a very late hour. The farmer was riding a small Highland pony, the boy being on foot. It was about midnight when they got to that part of Buckland Glen where a small bridge crosses the Buckland Burn. They had just crossed the bridge when the pony suddenly stood up and swerved, almost throwing the farmer out of the saddle. 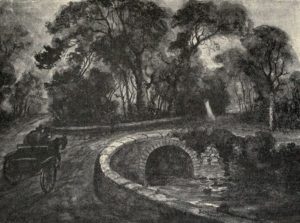 The old man looked, and muttering to himself whispered, “Aye, it’s there, laddie! It’s a’ true what hes been mony a time telt! That’s the ghost o’ the headless leddy wha was murdered in the glen in the aul’ wicked times. We’ll no gang by, but gang doon the lane and slip hame by Gilroanie.”

Turning the quivering pony they wended their way along the woods which thickly fringe the Buckland Burn, as it leads to the shore at the Manxman’s Lake, and reached home without further difficulty than keeping in hand the frightened pony. The curious fact was a week later discovered that two disreputable characters had lain in wait, for the purpose of robbery or perhaps worse, at a lonely turn on the Bombie road about a quarter of a mile from Buckland Brig. They had learned that the farmer had been to Kirkcudbright to draw a sum of money, and, had the sudden appearance of the Buckland ghost not turned their path, another tragedy might have been that night enacted in the Buckland Glen.

[Witchcraft and Superstitious Record in the South-Western District of Scotland by J Maxwell Wood, 1911]