‘Just outside St Margaret’s, a terrifying apparition has been spotted on what is now Oulton Road, close to St Margaret’s Church in Lowestoft, the famous blue-spired building of the maritime town which serves as a beacon for ships at sea. In around 1910, a local woman and her boyfriend, a sailor, were out walking in the evening: the area was very different to how it looks now, where there are houses there were fields and today’s busy roads were then quiet country lanes. The church, however, has remained the same, an unmissable building surrounded by a vast graveyard filled with memorial stones. One is that of 17th century Puritan Samuel Pacy who accused two women of bewitching his daughters and watched them both hang at Bury St Edmunds, alongside 38 other innocent people. 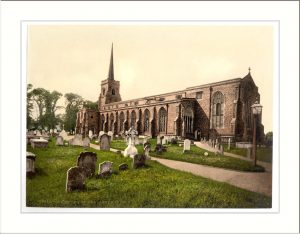 It was as our lovebirds approached the graveyard, ambling amiably in a haze of romance, that they saw something absolutely horrifying that stopped them in their tracks. In Lantern of summer 1974, the magazine published by Lowestoft’s Borderline Science Investigation Group, the chilling story of the ghosts of St Margaret’s Church in Lowestoft were featured.
Lantern’s piece reads: “…a strange figure suddenly appeared in front of them. He was dressed, as the lady would later recall like ‘Guy Fawkes’, wearing a tall hat and a long dark cloak which was pulled across his front.

“The most startling aspect of this apparition was the fact that his face was completely blank and featureless. As the sailor approached the figure to find out who it was, it immediately disappeared.”

On the Haunted Lowestoft Facebook page there are accounts of a similar entity being seen in the 1940s by a soldier returning home late at night who felt himself being watched from the graveyard and in the late 1980s, a father and daughter had the same feeling as they walked past. Most chilling of all is the witness who lived in a house that backed on to the graveyard and reported that they had seen the spirit trying to get into their home…

Similar figures have been spotted at Hopton and Corton close to Lowestoft where drivers have reported a tall man wearing a long coat or cape who appears suddenly in the road and, in some cases, stands stock still as cars drive through him. This figure, however, is different in one important way, as one witness to the ghost in the road seen in the late 1970s recalled: “I was struck most of all by the face, so much that I cannot recall seeing a body or even the outline of one,” he said.

“It was staring straight at me with a horrible sneer on its lips. It was not white or flimsy, but had a definite ‘flesh and blood’ appearance. I braked hard, but instead of hitting him as seemed certain, my car went straight through him.”

And St Margaret’s has, a witness claimed, been host to another ghost in addition to the faceless phantom: the White Lady of St Margaret’s has been seen in the churchyard and has been said to be St Margaret of Antioch. St Margaret was an early Christian martyr who was tortured before her death and then swallowed by the devil in the guise of a dragon before bursting unharmed from its body after making the sign of the cross.

Other stories mention the two female ghosts that haunt the porch of the church. The porch at St Margaret’s is two-storey and is known locally as the Maid’s Chamber from, it is believed, the time when it was an anchoress’ cell inhabited by two women called Elizabeth and Katherine (one may have been the other’s maid).
Like Julian of Norwich, an anchoress was a woman who was walled into a cell to live a life of prayer and contemplation (the male equivalent was an anchorite) – it was a strangely popular way of life for the devoutly religious in medieval times. An anchoress’ cell was attached to a church and contained three windows, one where a servant would bring food and dispose of waste, another that opened on the church so the anchoress could partake of Mass and a third to look out on the outside world. Some anchoress’ never left their cell, even after death…

For hundreds of years, there has been a long-held belief that much of the northern end of Lowestoft is built on top of the remains of a monastery, but there is no concrete evidence to suggest that this is, in fact, the case. There are, however, crypt-like cellars which have groined roofs and arches under some of the High Street buildings, although they are likely to be merchants’ cellars from the 14th and 15th centuries.

A persistent rumour suggests these cellars were linked by a network of tunnels which connects one side of the High Street with the other and St Margaret’s church, half a mile away. And there are plenty of ghosts at the other end of the supposed tunnel that might have fancied a different view…