In Halton Holegate, Lincolnshire, it is said that whenever someone in the village is about to die, a mysterious light will appear above their home. The origins of this legend stretch back to the middle of the 17th century. Thomas Clay was churchwarden of Halton Holegate between the years of 1658 and 1662. 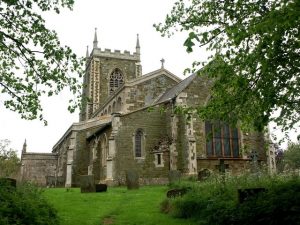 Clay lived alone on the edge of the fen a mile away from the church and would set out for the evening service every Sunday. Rather than taking the road, however, Clay always insisted on walking the rough ground over fields and fen. Clay, upon his deathbed, requested that his body be carried to the churchyard along the same route and even left money to pay the pallbearers for this inconvenience. On the day of his funeral though, the pallbearers decided that this would be an enormous waste of time and Clay’s corpse was taken via the road. That evening, a ghostly light was seen traversing the route which Clay used to take, before settling above the church tower. Since that day, ‘Clay’s Light’ has reappeared to warn the villagers that one of their number is soon to join him in death.

By P A McHugh