Town Bridge is another location in Christchurch that a Dorset Echo article entitled ‘Haunted Hotspots’ (10/12/2002), suggested a ghost had been spotted at. This bridge is thought to date from the 15th century and crosses the River Avon. The bridge is also sometimes called Quartley’s Bridge, which refers to a local surgeon who lived near one end of it. Dr Quartley appears in a local tale of smugglers, for one night it is said that two armed fugitives on horseback led him from his door to Bransgore, where he performed surgery on a severely wounded man, removing a musket ball. Upon leaving he informed the smugglers that the patient should not be moved. The patient, however, decided to let his friends move him on a cart into the New Forest, for the chance of dying whilst moving was considered better than certainly dying on the hangmans noose should he remain in place and be caught by the authorities. The smuggler survived and in payment a barrel of brandy was left on Dr Quartley’s doorstep. 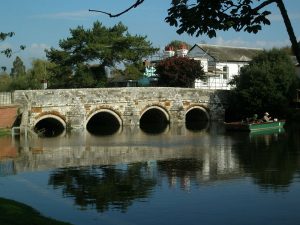