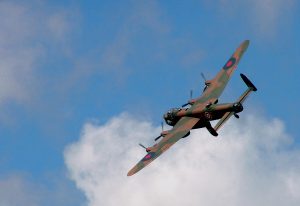 ‘A Derbyshire couple claim to have seen a phantom Avro Lancaster bomber in the skies above Chatsworth that vanished mid-flight into what appeared to be thin air.

The mystery aircraft was seen flying above the stately home and its grounds during the summer by Christine and Robin Gardner.

The couple recognised the famous Second World War bomber, and its distinctive sound, but were left scratching their heads as the noise of its great four engines fell silent.

Now the couple have come forward in a bid to try and unravel the truth behind what they saw that day.

Christine, 74, from South Derbyshire, said: “On August 18, I was parked up in Carlton Lees car park near the Garden Centre with my husband and a friend. Between 2pm and 2.30pm we returned to the car park and sat down to enjoy a picnic.

“Suddenly, directly in front of us at tree top height we heard the noise of an engine. We didn’t hear it coming – it was just instant.

“We looked up and all three of us saw a Lancaster bomber. It dipped its wings, continued at tree top height and turned as if to fly down the valley, but the Lancaster just suddenly disappeared and the noise of the engines ceased.”

The couple made inquiries with Chatsworth and the local council to see if a Lancaster had flown in the area that day, but never had any confirmation.

There are only 17 surviving Lancaster bombers in the world, but only two of them are able to fly.

Christine and Robin are sure they saw the famous war plane, but say no one else believes them.

Christine said: “We know what we saw and it was so real but no-one ever believes us.

“Surely someone else must have seen the Lancaster or heard it. It only appeared for less than a minute, but made such an impact on us.”