Red House Museum and Gardens can be found on Quay Street occupying a building which was originally constructed as a workhouse. The parish workhouse dates from 1764 and could initially accommodate 150 people. It was replaced by a newer one on Fairmile Road in 1881. 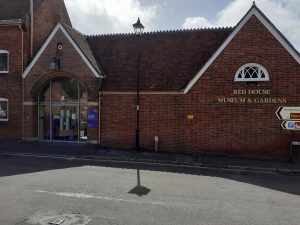 An articles from the Dorset Echo entitled ‘Haunted Hotspots’ (10/12/2002), implied that a ghost had at some point been seen in the building.