James Mackinlay in his Folklore of Scottish Lochs and Springs (1893) tells of another creature that was said to lurch in Loch Ness. ‘A noted demon-steed once inhabited Loch Ness, and was a cause of terror to the inhabitants of the neighbourhood. 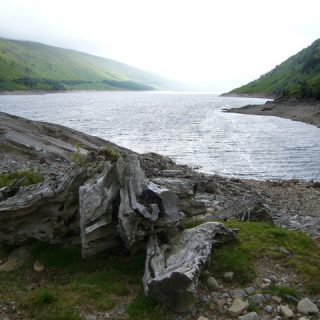 The freshwater Loch Treig (Loch of Death) has been a reservoir since 1929, however prior to this it had a reputation of being the home to some very dangerous Water Horses or Each Uisge.

The Black Dog of Kildonan

In his ‘Memorabilia domestica; or, Parish life in the North of Scotland’, Donald Sage (born 1789 – died 1869) described a treasure legend in the parish of Kildonan with a phantom Black Dog guardian attached to it.

John MacInnes And The Each-Uisge

According to Mr. J. Calder Ross in ‘Scottish Notes and Queries’ (1893) "John MacInnes found the labour of his farm sadly burdensome. In the midst of his sighing an unknown being appeared to him and promised a horse to him under certain conditions. These conditions John undertook to fulfil. 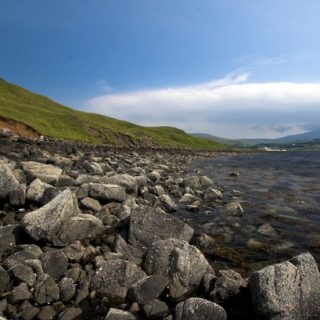 The Trotternish area of Skye was once the haunt of Colann gun Chean (The headless body) who would kill those unfortunate enough to cross his path by flinging his head at them. The ghoul was banished to Arisaig where he caused mayhem until a young man managed to capture the ghosts head – only promising to return it if he returned to Skye.

According to tradition recorded by Alasdair Alpin MacGregor (The Supernatural Highlands, Francis Thompson) a doctor holidaying at an Inn in Broadford on Skye witnessed a strange apparition by the sea. He was walking along the shore when he noticed a glow out to sea the glow came closer and as it did so became the figure of a woman in a cloak carrying a child. 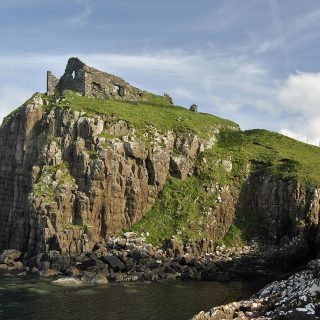 Duntulm Castle is now a ruined shell of its former glory as a MacDonald stronghold, its walls disintegrating year by year against the constant onslaught of the Atlantic winds. The site traditionally has a long precedence as a defendable stronghold: there may have been an Iron Age, and a Viking presence here, situated on the rocky promontory of steep cliffs overlooking the sea.