The following Gloucestershire Live article by Daisy Kim Horton, entitled ‘Wolf seen crossing M5 by lorry driver at 4am’ was published on 15 March 2021.

More wolf sightings have been reported and the latest comes from a lorry driver who saw the creature when on the road during the early hours of a wintry January morning.

The wolf was seen crossing the M5 at around 4am between junctions 12 and 13.

After the initial surprise to the lorry driver of what he had seen, he went home and looked online to confirm what he thought it was.

The lorry driver spoke to wildlife enthusiast Frank Tunbridge, 73, who lives in Podsmead. 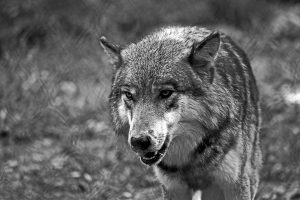 Mr Tunbridge said: “This sighting was relayed to me by a lorry driver, who after checking video images of wolves confirmed what he had seen at approximately 25 yards distance as ‘definitely a light grey wolf’.

“This could tie in with the large wolf like paw prints in the snow, reported from Edge Common in January by a lady out walking.

“The trail the animal left behind was in a straight line with purpose, unlike a large dogs mode of locomotion, which dogs meander here and there.

“So even with the large expanse of housing , business parks , roads and human activity these urban fringe predators live and exist in our midst.”

Mr Tunbridge believes that the absence of people in usually busy areas due to lockdown, has led wildlife to move back into these areas.

He said: “The abundance of wild deer throughout the UK which was at approximately 3.5 million at last count, and their subsequent encroachment into urban areas would be one of the reasons for the increase in British big cat sightings on the fringes of towns and other built up areas.

“In the first lockdown traffic and human footfall was at a minimum.

“Towns and public places became virtually deserted, and wildlife, which hates human activity and noise, began appearing back in their old haunts once again.

“People were out taking their permitted exercise often encountered this animal activity, especially deer, and occasionally caught a glimpse of one of our big cats, following in the footsteps of the deer which fuel big cat’s diets much of the time.

“I think that just like urban foxes, we are now seeing more examples of these stealthy animals being attracted to the fringes of highly populated areas.

“They are not only by the frequent small deer, but by the meat waste discarded by us, especially near late night fast food outlets.

“The latest deer carcass found on Minchinhamton common seems to display many of the signs of a big cat kill, with marks of a large carnivore having used the throat area to dispatch it .

“I have had similar situations reported to me in the past.”