The Chichester Inn, (formerly known as the Castle Inn) has a reputation for being haunted by a Roman solider.  The following account of the haunting by Joe Stack was published in the Sussex Express (13 July 2021).

‘A Chichester landlord has shared spooky reports of a Roman centurion whose ghost is said to haunt his pub.

The Chichester Inn, in West Street, sits just inches away from where the city’s ancient walls are and where the west gate of the city once stood.

Those familiar with Chichester’s rich history will know that more than 900 years ago, a Roman centurion might have been a common sight in the area but in the year 2021 a very different type of Roman is rumoured to exist there. 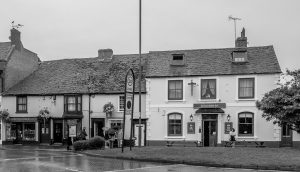 The ghost of a Roman centurion is said to haunt the watering-hole as it continues to patrol the city call for the simple reason that it was ‘never told to stop’.

The pub has been approached on numerous occasions by paranormal investigators who have endeavoured to prove the apparition’s existence but the closest they have got is reportedly hearing a bar stool rattle in the early hours of the morning.

While landlord Nick Webb says he has not witnessed anything himself, he keeps an open mind.

He said: “We have had a few inexplicable electrical issues like equipment turning itself on.

“We’ve also had some of those [paranormal investigators] talking about the presence of an orb.

“Customers said they have seen it, especially when they are drunk.

“The centurion is supposed to be patrolling the old city walls still because no-one ever told him to stop. The pub sits about one metre inside the city walls and right next to what would have been the west gate.

“Potentially, if he’s around, he can walk through the bar. I keep an open mind but I have never seen anything.

“Some people are more perceptive to these sorts of things.

“My ex-partner was quite interested and into these things and she reckons she was woken up at 4.23am every day by the sounds of latches rattling in a room in the loft.”