There is a story associated with St Peter’s Church, Slinfold which concerns the common folklore motif of a new bell being lost in transport.  The bell in question is thought to have been enroute to Slinfold from London.  Possibly along the old Roman road, Stane Street.  About a mile from Slinfold, at Alfoldean the bell fell from the wagon in which it was being transported and fell into a bog or swamp.  The carters and growing crowd of onlookers struggled in vain to retrieve the bell which was sinking.  At some point a witch became involved, either she was passing by and offered assistance or was sought out for help.  She had a team of white oxen and used a rope or chain to hitch them to the bell.  In order for the bell to be pulled out, she demanded silence and warned the crowd that should anyone speak before the bell was recovered, then it would be lost forever.  One account suggested it could be performed at Midnight. As the oxen pulled and appeared to be making progress, somebody shouted out in excited joy.  What was shouted varies according to the source, but it was something like “Hurrah” or “We’ve got the Alfoldean gurt bell, in spite of all the devils in hell”.  Her spell was broken and the bell sank, never to be seen again. 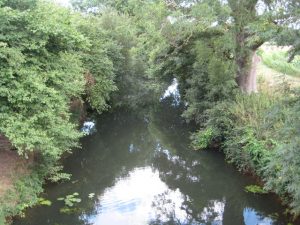 A dowser in 1971 apparently believed he had found the bell with his rods but further exploration with a metal detector apparently failed to verify the claim.