Country and County: City of London 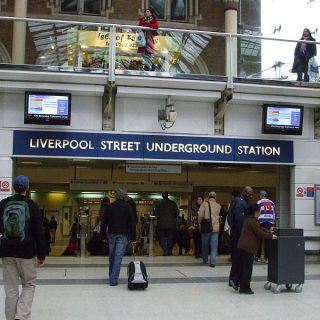 Receiving roughly 123 million visitors per annum, Liverpool Street Station is considered to be the third busiest station in the United Kingdom. It is built on the site once occupied by the original Bethlem Royal Hospital (Bedlam) and is reputedly haunted by an ex-patient of the infamous asylum.

Founded in 1123 by Rahere, a jester/minstrel in the court of King Henry I (1068 – 1 December 1135), making this one of the oldest churches in London. Originally established as an Augustinian Priory Church, its nave was demolished in 1539 when King Henry VIII ordered the Dissolution of the Monastery’s.

In 1982 Chris Brackley took a famous photograph whilst he was in St Botolph’s Church. The photograph was of the interior of the church, taking in the aisle, altar and main stain glass window. In the upper right hand side of picture there appears to be ghostly image of a figure dressed in period costume in the Choir Loft.

Aldgate Railway Station which serves the Circle Line and Metropolitan Line opened on 18 November 1876 and is said to have been built on a Plague Pit where hundreds of victims of the Bubonic Plague of 1665 were buried. Daniel Dafoe mentions this ‘terrible pit’ in the churchyard of the Parish of Aldgate in his ‘A Journal of the Plague Year’ published 1722*. 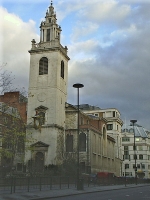 St James’s Church Garlickhythe is an ancient church that was destroyed during the Great Fire of London of September 1666 and rebuilt by Sir Christopher Wren (opening on 10 December 1682, though the tower was not finished until 1717). 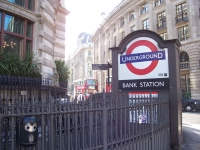 The Bank-Monument Station complex is comprised of the two interlinked underground stations of Bank and Monument. The complex is the eighth busiest station on the London Underground network and it serves the Waterloo & City Line, Central Line, Northern Line, Circle Line, District Line and the Docklands Light Railway.

St Michaels’ Church in Cornhill is a Grade I listed building, built by Sir Christopher Wren between 1699 and 1672 following the destruction of the earlier medieval church in the Great Fire of London. It was in this now lost medieval building that according to legend a creature was encountered by the bell ringers early in the first half of the sixteenth century. 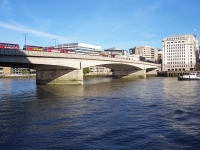 Around the area where the old London Bridge stood there is a tradition that ghostly cries for help can be heard as if people are drowning in the River Thames. This dates back to a dark time in English history and the cries are thought to be those of a group of Jews that were tricked by a ships captain in 1290.

The Bank of England and The Black Nun 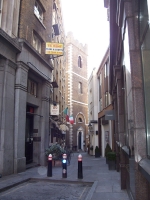